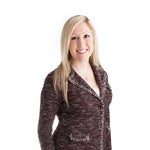 Ms. Cieslak's practice focuses on all aspects of labor and employment litigation in state and federal courts, as well as administrative agencies, including the defense of public sector and private employers against claims of discrimination, wage and hour violations, breach of contract, free speech retaliation, whistleblower retaliation, and other civil rights violations. Ms. Cieslak also handles appeals before the Appellate and Supreme Courts of Connecticut.

Ms. Cieslak has been recognized by Best Lawyers: Ones to Watch, and she has been selected to the Connecticut Rising Stars List by Super Lawyers Magazine since 2015. Additionally, in 2019, Ms. Cieslak was also awarded a Professional Excellence Award as New Leader in the Law by the Connecticut Law Tribune. She also has a "AV Preeminent" rating by Martindale-Hubbell, having been recognized by her peers for having very high ethical standards and the highest level of professional excellence.

Prior to joining Rose Kallor, Ms. Cieslak was an attorney at a small Connecticut firm that focuses on labor and employment litigation and personal injury law.

Ms. Cieslak holds a Bachelor of Arts, summa cum laude, in Political Science from the Pennsylvania State University, with minors in Spanish and Women's Studies. While at Penn State, she was named to the Dean's List and was inducted into and elected president of Penn State's Chapter of Pi Sigma Alpha, the National Political Science Honor Society. Ms. Cieslak received her Juris Doctor from the University of Connecticut School of Law, where she served as Book Review Editor of the Connecticut Law Review and participated in the American Association for Justice Student Trial Advocacy Competition. She is the recipient of two CALI Awards for Excellence in courses on the First Amendment and the Americans with Disabilities Act.

The University of Connecticut School of Law J.D., 2012