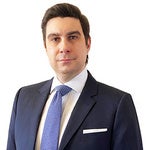 Andrew B. F. Carnabuci is an associate attorney at Rose Kallor.  His practice focuses on litigation and counseling relating to wrongful termination and workplace discrimination under both state and federal law, retaliation, sexual harassment, wage and hour, breach of contract, § 31-290a, § 31-51q, § 19a-532, and the Family and Medical Leave Act.  He excels at crafting dispositive motions that can make quick work of the toughest cases, and he has obtained many dismissals through incisive and creative motion practice in both state and federal court, and before administrative agencies.  He has handled successful state and federal appellate work, as well as more informal arbitration and mediation proceedings.  He also has experience working on complex commercial and business tort litigation, including second-chairing a successful trial against a Fortune 500 company.  He was selected as a Super Lawyers “Rising Star” for 2021, in employment litigation defense.

Mr. Carnabuci holds a B.A. in History & Classics from Middlebury College, and a J.D. magna cum laude from Quinnipiac University School of Law, where he received a Dean's Fellowship for all three years. In law school, he served as the Supervising Editor of the Quinnipiac Probate Law Journal, and his journal article, Avoiding the Fate of Argos, 31 Quinnipiac Prob. L. J. 281(2018), was recognized with awards from both the law school and the Judge John R. Brown Excellence in American Legal Writing Competition, and is cited in LexisNexis Practice Guide: Connecticut Estate Planning, § 4-26 (2020) on the topic of "pet trusts" under the English common law. While in law school, he also received Awards for Distinguished Academic Achievement (highest “A" given that year) in Civil Procedure II, International Law, and Jurisprudence; as well as the Award for Outstanding Legal Scholarship, the Award for Excellence in Clinical Work and the Award for Service to the Law School. He engaged in extensive supervised and independent scholarship related to Fortescue, Lord Coke, Blackstone and the historical English common law, including a comprehensive treatment of the English common law foundations of the modern American doctrine of substantive due process. He was a summer clerk for the Hon. Michael Dolinger in S.D.N.Y.

Mr. Carnabuci is fluent in Old English, and has engaged in extensive literary scholarship in the field of medieval Old English and Anglo-Saxon literature.  He has published three books of Old English translations: Þær His Eðel Wæs (2018), Beowulf: A Verse Translation from the Anglo-Saxon (2019), and King Alfred's Metres of Boethius (2022).  He has been invited as a guest speaker on Anglo-Saxon poetry at several prestigious independent secondary schools in Connecticut, New York, and Washington D.C.  In what remains of his free time, he enjoys playing mechanical nurse-wife to his senescent Land Rover and listening to the music of senescent 1970s rock bands.  He is a dual-citizen of both the United States and the Republic of Ireland.

United States District Court for the DIstrict of Connecticut

United States Court of Appeals for the Second Circuit